[KIT]Top 4 most played game on steam 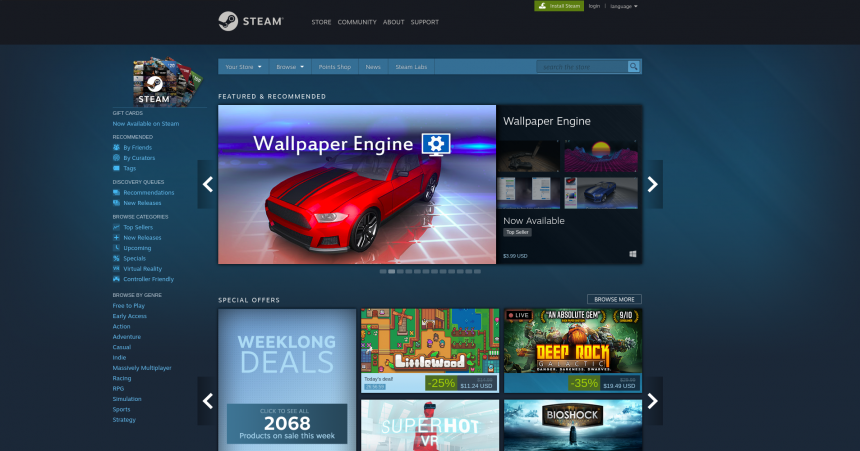 During the 21st century, our life have been involve with technology. There are unlimited access to the internet and also the invention to make computer almost access to everyone is possible, the hobby have shift from kids from toy or TV to computer or digital through the internet. From poor graphic to advanced 3d with great texture and also the most advance component nowadays there are a lot of talented people who become developers have been creating many games that make it accessible to anyone around the world. One of the platform that is the most well known and also people spending money on the most for game is steam. There are estimated that there are around 120 million steam account. With this much people on the community, it makes us wonder what are the most top 5 popular game on steam that make that community grow so big?

But before knowing why people tended to choose this platform for their gaming experience which lead to us wonder what are their top 5 games, first we must know why people tend to choose it? So the reason that people choose steam community or dare to spend money on that platform is as for that particular reason this platform is very secure regarding the payment method so we don’t have to worry about our credit card got scam. Plus steam server is rarely down, it is well known for their maintenance. The longest server downtime that steam ever happened was 15 minutes and not to mention this incident happened 6 years ago. So back to our top 5 games on the list, the first game that is very popular is APEX LEGEND. After the launch of the game, there are 100 thousands plus active online users. It’s user friendly and also easy to play the game looks very impressive, attractive and plus it’ lived up to the hype of steam community. Second is Valheim. Active players on this game is almost 200 thousands. That game has nice graphic, very lifely animation. It is the game of the type that include survival, open world RPG which means that we can roam around the map freely in order to obtain the items inside the game. The experience that we got will be implies to the skill that we will be built. Third is PUBG. Active player is around four hundred and fifty thousand and it is the type of game that is call battleground. It is very competitive, require skill, tactic, master plan, leadership, strategy, energy, concentration in order to sucess or shall I say win the game. This game generate a lot of revenue and also it live up to reputation and also hype that active steam users have been expected that game, PUBG to be that astonishingly good and also very popular on E-sport event. Last is CS:GO. It has over 1 million users active users that pro-actively play everyday, every time. It is the type of game that is called First person shooting game where it highly rely on the reflection and also require the high IQ in order to structure the game plan. Communication is also the key to success.

To summarize what I have been stated beforehand, CS:GO is the most popular game that steam community are in love with also addicted to play follow up with PUBG, Valheim and APEX LEGENDS. I hope you have a chance to buy the game and try it yourself.

[KIT]Top songs you should listen during this difficult time [KIT]Top 3 reasons you should not drink alcohol